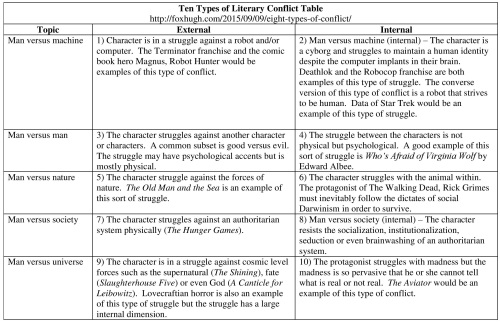 Aristotle posited four types of conflict. Three types were external including man versus man, man versus nature and man versus society. Aristotle treated internal conflict as a category in its own right and this internal conflict is generally labeled as man versus self. This is an attempt to revamp Aristotle’s thesis and suggest there are actually five major conflictual topics and each topic can have an external versus internal perspective.

1) Man versus machine (external) – Character is in a struggle against a robot and/or computer. The Terminator franchise and the comic book hero Magnus, Robot Hunter would be examples of this type of conflict.

3) Man versus man (external) – The character struggles against another character or characters. A common subset is good versus evil. Batman versus the Joker would be an example of this sort of struggle. The struggle may have psychological accents but is mostly physical.

4) Man versus man (internal) – The struggle between the characters is not physical but psychological. A good example of this sort of struggle is Who’s Afraid of Virginia Wolf by Edward Albee.  Commonly a character has a psychological problem that causes conflict with the other characters this problem can be alcoholism, neurosis, a personality disorder, or even a character flaw. The conflict is internal but the audience see’s the manifestation of the internal struggle via the effect of this conflict on other characters. Watching an alcoholic talking to himself in a room is a lot less fun to watch than watching an alcoholic at his birthday party.

5) Man versus nature (external) – The character struggle against the forces of nature. The Old Man and the Sea is an example of this sort of struggle.

6) Man versus nature (internal) – The character struggles with the animal within. The protagonist of The Walking Dead, Rick Grimes must inevitably follow the dictates of social Darwinism in order to survive. There is an animal inside man and in the struggle with nature this animal may have to be unleashed for us to survive. Some Vampires may want to control their thirst for blood but the animal within is too strong. The humanity of the vampire in conflict with the vampiric urges of the vampire seems to be a recurring conflict in the works of Anne Rice and this is especially true in the case of her character Louis de Pointe du Lac.

7) Man versus society (external) – The character struggles against an authoritarian system physically (The Hunger Games).

8) Man versus society (internal) – The character resists the socialization, institutionalization, seduction or even brainwashing of an authoritarian system. Joker in Heavy Metal Jacket takes part of collective punishment to Pyle and becomes part of the system he had previously derided. Chief accepts the system in One Flew Over the Cuckoo’s Nest. Chief is huge yet chooses not to talk because his shackles are internal not external. The character struggles not to become institutionalized or socialized but the struggle may in turn make the character more ruthless and similar to those in the system.

9) Man versus universe (external) – The character is in a struggle against cosmic level forces such as the supernatural (The Shining), fate (Slaughterhouse Five) or even God (A Canticle for Leibowitz). Lovecraftian horror is also an example of this type of struggle but the struggle has a large internal dimension. The most common version of this cosmic level struggle is actually not with God but with the Devil in deals with the devil stories. Man is hopelessly outmatched in terms of power in this type of struggle and cannot win via power but must rely on his wits and/or luck.

The realization that the universe is absurd is generally treated as an existential crisis that falls under is (5) man versus self. However, in some cases the universe is absurd due to an external cosmic level change. The very nature of reality has altered due to unknown and often unknowable mechanisms. The TV show The Twilight Zone specialized in this type of man versus universe scenario. In the very first episode of The Twilight Zone, Where is Everybody?, a man finds himself alone in a town. All the people have mysteriously disappeared. Rod Serling, the writer bothers to come up with an “explanation” of why there are no people in this episode but in other episodes the universe has changed and no explanation is given and this is much more disturbing. In The Twilight Zone episode, And When the Sky Was Opened, astronauts start being erased from existence one by one and no real explanation is given and this lack of explanation makes the episode all the more disturbing.

Perhaps this is why zombie stories are so disturbing. One level of conflict in a zombie story is man versus man in that the protagonist must fight other humans in the struggle for resources but also must deal with the fact that the impossible has happened. Our scientific world view precludes the existence of zombies but the character must deal with a universe gone mad and this struggle is perhaps more disturbing than the struggle with zombies. If zombies are explained using a disease model as in the case of The Walking Dead then a cure might exist. However, George A. Romero realized that living dead that exist as an ontological puzzle are much more disturbing than a voodoo based or science based zombie. In Day of the Dead, Romero explores the ontological puzzle of living dead in more detail. Is the fabric of reality a fragile thing that can suddenly change? We like to think this is not the case but when the Aztecs fought the Spanish they also fought a change in their world view that perhaps was more harmful in the long run.

10) Man versus universe (internal) – The protagonist struggles with madness but the madness is so pervasive that he or she cannot tell what is real or not real. The Aviator would be an example of this type of conflict.

One response to “Ten Types of Literary Conflict Table”