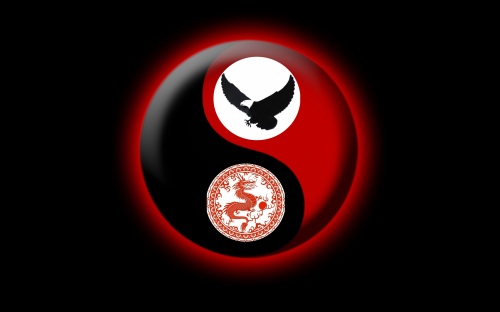 Dr. Delta: This meme is extremely infectious but virulence is difficult to measure.

FS: Yes, I had a dream that a giant eagle and a giant dragon were fighting.

FS: Neither won because archers in turbans aimed flaming arrows at the eagle and dragon and destroyed both of them. The archers then took out scimitars and cut up the body of the eagle and the dragon.

DG: Why did they cut up the bodies?

FS: I am not sure but the pieces of the body then commingled and became monsters that were half eagle and half dragon in every combination conceivable. The monsters then attacked and ate the archers and finally attacked each other until all were dead.

DG: When I say dragon what do comes to mind immediately.

DG: So basically this is a political dream of some sort. Are you very political?

FS: Actually I could care less about politics.

DG: Dr. Arrow! How long have you been standing there?

Dr. Arrow: Long enough, dreams are the royal road to the unconscious? Royal road to bullshit is more like it. Dreams are a manifestation of the brain reorganizing information it has acquired over the day. There is no more meaning in dreams than the defragmentation of a hard drive.

DG: Get the hell out of here!

DG: Listen you philistine, this is regularly scheduled treatment and is every bit as important medication.

DG: I will take this up with Dr. Delta.

Dr. Arrow: You better believe I will.

DG: Beware the wrath of the Omegas!

DG: Nothing, I just meant if the patient’s treatment is interrupted then he will still believe in the Omegas and in a way suffer the wrath of the Omegas.

Dr. Arrow: Whatever you say fraud.

DG: At least I am not a crypto- humanoid like you. I will let this go for now but there will be consequences.

Dr. Arrow: I’m not playing anything. I don’t play mind games unlike some people. Again what is a crypto-humanoid?

Dr. Arrow: Spare me. GIGO: Garbage in, garbage out. Keep your garbage to yourself.

DG: Do you find the Odd Couple funny?

Dr. Arrow: I thought the Neil Simon film was okay. I didn’t care much for the TV show.

Dr. Gamma’s Notes: Dr. Arrow’s rudeness is astounding. I will very definitely complain to Dr. Delta. I video tape all my sessions and will use this as evidence of Dr. Arrow’s unprofessional behavior. I have my own suspicions about Dr. Arrow but these suspicions are so radical that I will keep them to myself until I have gathered the proper evidence.

Sneaky Squares are an obvious manifestation of the patient’s paranoia. Records indicate the patient once had a roommate named Cord and this is probably were the patient got this name. The dream about the eagle and the dragon seems to have some sort of political significance and this is very unusual for dreams.

Dr. Delta: Dr. Arrow had disappeared around this time. Dr. Arrow had originally worked for many years in the prison system and his prior prison patients are the first suspects. Patients suffering from meta-psychopathology disorders are actually much less violent physically than the general population or at least this is statistically true. It’s almost as though they substitute psychic violence for physical violence. Dr. Gamma said at that time that he had no knowledge of Dr. Arrow’s whereabouts.

This session puts forth a flat out logical political argument and therefore can be dealt with a conscious affirmation. Repeat the following at least one hundred times:

Again, if you start thinking that perhaps the US is not number-one then seek professional help if these thoughts do not go away. Staring fixedly at a US flag and repeat:

Again and again, this measure can act as a quick stop gap form of self-treatment.

Ungaro: Gamma’s Asian Union fantasy is not as far out as one might think. ASEAN is an organization of South East Asian nations that wants to make ASEAN into more of an EU type organization.   ASEAN in turn is negotiating free trade agreements with China, Japan and India. I think the US invasion of Iraq has forced India and China to think of working together in order to counter balance US imperialism.

The subship is also not as wild as one might think. I saw a show on the Discovery channel about building a transatlantic tunnel. The distance between Taipei and Shanghai is much, much less than the distance between the US and England.

The invasion of Taiwan is also not so far out. President Chen of Taiwan is trying to create a new constitution despite a total lack of a mandate and the deep divisions his suspicious election caused. Many expats in Taipei think Chen’s move will lead to war with Mainland China. The US has moved a squadron of B-52 bombers to Guam in order to defend Taiwan. Chen himself has actually cut defense spending while China’s military spending expands exponentially. Chen seems to believe in doing the opposite of carrying a being quiet and carrying a big stick. Chen believes in yelling at China and throwing away Taiwan’s stick. Maybe the invasion of Taiwan fantasy will happen after all.

Gamma and I went to the Taipei 101 Mall. Taipei 101 will be the tallest building in the world when completed. The mall is connected to the building and you can see the actual 101 building on the fourth floor of the mall since the roof is made of glass.

The best part of the mall is the Page One bookstore that is by far the best bookstore in Taiwan. In particular there is a huge selection of Western comic books in book form. Basically past runs of comic books are put together in a book. There is a new comic book called The Authority that I had heard about but never been able to find in Taiwan. Well there were three years worth of collected issues in six volumes. Sat down and read the whole collection in one sitting. Gamma was reading the Legion of Superheroes. I used to be a big fan of the Legion when I was kid but like the more modern gritty stuff nowadays. The Authority is a super team that goes ahead and starts solving global problems instead of just catching bank robbers. The team goes ahead and kills the President of Serbia and warns the rest of the cabinet that they will be back for them if the cabinet doesn’t stop the war atrocities. They also kick the Chinese out of Tibet. The idea that a super team would go ahead really solve global problems was explored in the Squadron Supreme.   The Authority is about ten times more violent than the Squadron Supreme. Gamma got bored with the bookstore and wandered around the mall while I finished reading the Authority.

Gamma commented that the Taipei 101 tower would be a great target for Chinese missiles were lobbed at Taipei. Gamma has been reading the Taipei Times and China Post, the local Taiwan papers, and read that China had 550 missiles aimed at Taiwan. Gamma is obsessed with this fact.

I looked at the map and a subship between Shanghai and Tokyo is impossible since Tokyo is on the wrong side of Japan and faces the US not China. You could make a subship between LA and Tokyo in theory but not between Shanghai and Tokyo unless there were a land route added to the subship route. The Discover channel did have an episode of Extreme Engineering and documented plans to build a transatlantic tunnel using technology similar to the subship. This episode is probably where Freak Show got the idea in the first place. Looking at a map that shows seabed I think you could easily make an underwater tunnel between Fujing and Taipei since both are on the same continental shelf and therefore the depth is not so great. Interestingly when I looked at the map I noticed that Busan in Korea and Shanghai are also share a continental shelf so I suppose and underwater tunnel between them would also be feasible. You could link up Busan and the Japanese city of Kitakyushu. Kitakyushu is a major port city anyway.