You are probably living in a virtual reality!

One of my favorite movies is the Matrix which posits that Neo, the hero is living in a virtual reality without realizing this fact.  I would like to playfully propose we are in fact living in a virtual reality and this is why numerology works.  Let me try to convince you or at least disturb you.  There is one planet Earth but there are thousands and thousands of video games.  In another 20-50 years those video games will be replaced by superior virtual technology and we will have thousands and thousands of virtual realities instead.  I think a civilization that creates virtual technology would also last a very long time unlike our current civilization.

As a Buddhist I think the fundamental problem of human existence is suffering ultimately caused by desire.  This idea is encapsulated in the Four Noble Truths of Buddhism.  As a modern Buddhist I think the fundamental problem of technological civilizations is environmental degradation and war with weapons of mass destruction that follows from uncontrolled desire.  Humans can learn to control desire or have all their desires met a million times more cheaply and more effectively via virtual reality technology.  The second solution to the problem of human existence seems more realistic given human history.  Civilizations that achieve virtual reality avoid the problems of war and environmental destruction and last for thousands and thousands of years and create millions upon millions of virtual realities.  So from a purely logical point of view you are probably living in a virtual reality and that is why the Matrix is so disturbing.  The premise of the Matrix is probably true.

Numerology is generally defined as a system, belief or tradition that emphasizes an esoteric relationship between numbers and physical objects or living things.  I propose a virtual reality would be more numerological than a non-virtual reality.  Programmers in our reality use modules and the programmers of our reality probably do the same.  These modules mean there are many numerical patterns that are repeated again and again.  A non-virtual reality would lack these modules and therefore these numerical patterns.

What Type of Virtual Reality Do We Live in?

This means numbers are used more as book marks in our virtual reality rather than as symbols as would be the case in an entertainment virtual reality.  The programmers use certain numbers to let the little children watching our reality know that something important is about to happen and that they should pay attention.  From our point of view these numbers are omens.

Many spiritual views posit a hierarchy of realities. Heaven stands above Earth. Perhaps some individual perceive the reality from which we are created, our parent reality, and call that reality heaven. Plato’s Theory of Forms suggests another abstract reality that is more “real” than our reality. Perhaps Plato perceived something akin to the “machine code” of our reality and used the concepts available to create his theory.

The golden ratio used to create our reality has been calculated to some incredible degree of digits by the creators of our virtual reality but sooner or later we will create a computer that calculates the golden ratio to an even greater number of digits and when this happens this will cause an insoluble contradiction in the program that underpins our reality and our reality will literally dissolve.  All forms in nature dependent on the golden ratio will be the first to go and as they are erased then so will the rest of reality.  We are not “real” brains connected to a virtual reality as is the case, in the movie, The Matrix, that will awaken, instead we are purely program constructs and when the program goes we go!

Perhaps this is the origin of the significance of 666.  At some point in our future a tyrannical world government will recognize the true nature of our reality and ban social and intellectual conditions that allow the creation of a golden ratio that will destroy our reality.  666 is a rational number and as such the opposite of an irrational number.  The rapture may refer to some humans that are uploaded to a new virtual reality that has been created as a backup for this virtual reality.  The inhabitants of this virtual reality will have total understanding of the actual nature of their reality and operate in a way that is alien to us.

The following appeared in Avengers A.I. #4 about three years after I first posted this article: 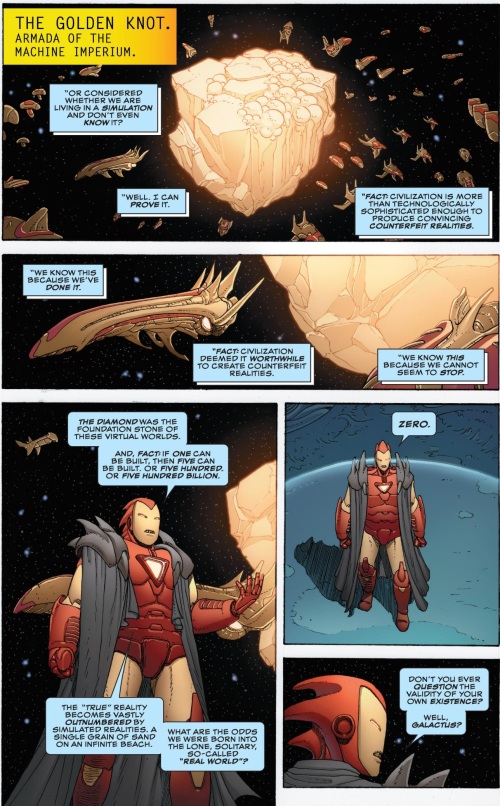 The illustration refers to the “The Golden Knot”. Is this some reference to the golden mean as a means to destroy our virtual reality? Is the truth is slowing entering the mass consciousness!

If we are in fact programs in a virtual reality then we may be products of code reuse. Obviously human beings are some type of heuristic program. Some types of heuristic programs may be more data dependent in order to function effectively. This means the programmers are willing to let the heuristic program have some data that is interpreted as memories from prior lives i.e. reincarnation.

Older reused codes also become more complex and develop a nice little survival trick via trial and error. Those who develop this ability survive and those who cannot develop this ability do not survive. Old codes deal with the virtual reality at a deeper level than newer codes. So called “old souls” can more or less predict the future. These individuals are more able to predict how the virtual reality is going to work because they can access the machine code and/or assembly language part of the program before the high-level programming language, which is what we perceive as physical reality, goes into effect. Our virtual reality is so gigantic that the lag time between the lower order part of the program and the higher order part of the program is perceived as days, week and even years by us.  Something sensed in the virtual realities equivalent of the machine code may take years to happen and the machine code version of our reality is really hard to understand.  Something that is happening in the assembly language part of the program is a lot easier to understand and happens weeks later.

People who can understand the machine code of our virtual reality are generally in bad shape when it comes to day to day living. Chiu-fang Kao is an example of a person with this problem. Chiu-fang Kao, as describe in Liezi Book 8 Part 9 – Judge of horses, could judge the excellence of a horse but in one case misjudged the color and gender of a horse. This may work out for some but all in all this is not a good place to be if you want little things like keep a job and food on the table.  There is another category of person that focuses on the assembly part of the program and can see things a few days or weeks and months ahead of time and maybe is smart enough not to push their abilities too far in order to keep their sanity. 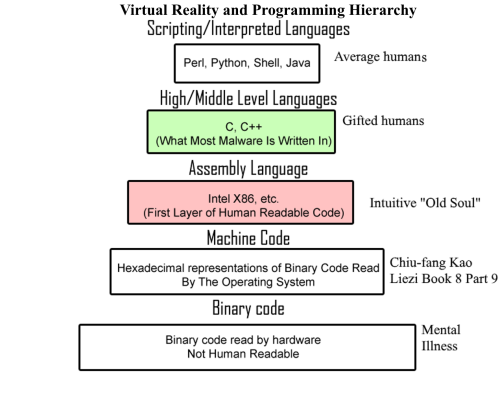 The virtual reality we live in may be created by something like an object-oriented language. Humans perceive the objects and classes of the object-oriented language. Objects are more or less concrete perceptions of reality. An object is a member or an “instance” of a class. An object has a state in which all of its properties have values that you either explicitly define or that are defined by default settings. Classes are more or less abstract perceptions of reality. A class is a template for objects. Logically we separate concrete perception and abstract perception but our actual stream of consciousness is a mish mash of both types of perception. As we grow older we learn how to separate concrete and abstract perceptions and thus can logically understand the universe. However, in the process of separating these two types of perception, we lose some of our intuition. Our innate ability to perceive the class nature of objects and see the strings behind the screen. Kids Say the Darndest Things and show a non-logical ability but sometimes accurate way to figure out reality out that challenges our assumptions as to how reality works.

When we perceive and object as an object but also have some perception of the class structure of the object simultaneously then this is a kami (Japanese: 神) perception. The object is an object but awe follows as we perceive the more or less infinite nature of the class structure of the object. Average humans can achieve kami perception when exposed to the right objects. Meoto Iwa, or the Married Rocks, is more or less a three dimensional kōan. 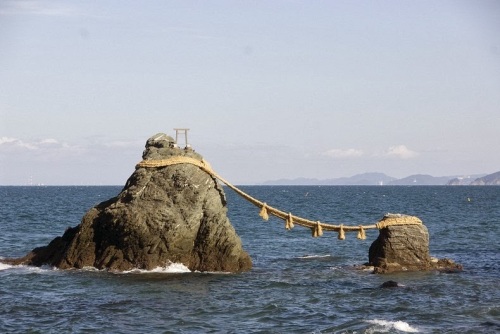 A kōan (公案) (/ˈkoʊ.ɑːn/; Chinese: 公案; pinyin: gōng’àn, [kʊ́ŋ ân]; Korean: 공안 kong’an; Vietnamese: công án) is a story, dialogue, question, or statement, which is used in Zen practice to provoke the “great doubt” and test a student’s progress in Zen practice. Rocks are inanimate and not human. The idea of rocks that can be married creates category dissonance that within a Shinto belief system gives us a glimpse of the virtual aspect of our reality.

Common objects may also reveal their “sacred” nature through ceremonies like the Japanese tea ceremony which in actuality is our possibility to see the class level nature of the ceremony. A particular ceremony when done in a ritualistic manner exposes the template nature of the all ceremonies. In a kami state of perception we have a glimpse of how satori consciousness may operate!

Satori (悟り) (Chinese: 悟; pinyin: wù; Korean: 오 o; Vietnamese: ngộ) on the other hand is the perception of our own object/class nature. Satori is our perception as to how our own program is part of the larger program we call reality. In satori the human senses their oneness with the universal. There are levels of satori. A person who has achieved a low level of satori may achieve a kami perception of particular objects as was the case with Chiu-fang Kao. Chiu-fang Kao could see the superlative i.e. class nature of a horse but at the expense of perceiving the object nature of the horse i.e. the particular attributes of the horse. Some people have special insight into particular objects. However, a person who has achieved a high level of satori can see the class nature of many objects. In particular, this person can meet other people and know things about that person through what appears to be extra sensory means. To some extent a person with a high level of satori knows the past and future of the program i.e. person they meet!

2 responses to “Numerology and Virtual Reality”