This role play is designed to help you understand the following concepts:

2) Persuasion is a process

The students were supposed to watch the movie Avatar the week before as homework.  This exercise assumes you have watched Avatar already.  There are two persons in this role-play. Despite the fictional and fantastic setting of this role-play, I want the students to take this exercise seriously.  I hope fictional and fantastic setting allows participants to think more creatively and not bring assumptions of “real life” to the exercise.  These negotiations are happening about one year before the events in Avatar.

Your job is to convince the representative of the Na’vi clan Omaticaya Princess Neytiri that the interests of her clan that allowing the company access to their lands for a valuable material called unobtanium.  Instead of a traditional vertical drill, the company is willing to use horizontal drilling despite the fact that this is much more expensive, in order to preserve as much of the habitat of the clan as possible.  The natives are almost impossible to understand and do not seem to value money, education, or any services or goods your company can provide.  You goal is to get the Omaticaya clan representative to agree to vertical drlling.  There are many senior executives that think persuasion is a waste of time and military means should be used to evacuate the Na’vi.  Below is a picture that provides an example of vertical drilling. 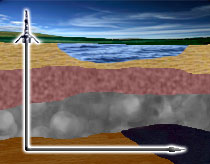 Neytiri Princess of the Omaticaya Clan

Your father is the clan leader but has picked you as a representative since you speak English and went to the Sky God school.  You do understand the Sky Gods better than your father but do not wish to appear a traitor to your people.  You wish the Sky Gods would just go away and leave your clan alone.  You have more knowledge than most of your people of the Sky Gods but still do not realize how incredibly powerful their military technology really is and think if negotiation breaks down then your warriors can defend the land of your clan.  Your goal is to convince the company representative to leave your people alone.  The unobtanium is under the Hometree and this territory is forbidden to outsiders period.

Discussion Questions for Before the Role-Play

1)  Historically, in the real world, have there ever been situations similar to those in Avatar?

2) The territory of the Hometree is considered sacred by the Na’vi.  This territory is off limits to outsiders.  This would include territory under the Hometree.  Does your culture have the idea of sacred territory?  Is there any territory in your country that absolutely could not be used for commercial purposes no matter what the price offered?

4) Are there any cultures now or in the past that have not valued money?  Do all cultures value money equally?  What does your culture value above all else?

Discussion Questions for After the Role-Play

1) Were the two of you able to come to a peaceful agreement or did negotiations break down?

2) How did you apply the principles of chapter one to the negotiation process?

3) What other techniques would you suggest for this exercise?