I am now living in Siem Reap, Cambodia!  This is the eleventh country I have lived in (countries visited).  This is also the 25th city I have lived in!  One of the first things I do when I get to a new place is get shelving to multiply counter space.  This can be done very cheaply with plastic shelving and makes life a lot more convenient.  I would also say always get a furnished apartment because you never know with a new country.  Even furnished apartments rarely come with much in the way of shelving.  Below is a photographic essay of the mundane subject of apartment shelving evolution!  The four-shelf monstrosity below ended up in the kitchen first, then next to the TV and finally ended up being shelving for my electronics!  I used three kits to make the shelving below because the store next to me (new Angkor Market on highway 6) only had three kits in blue!  The kits were designed to make three, three shelf units.  Blue is your safest color for plastic stuff period.  The most common color for plastic houseware is blue. 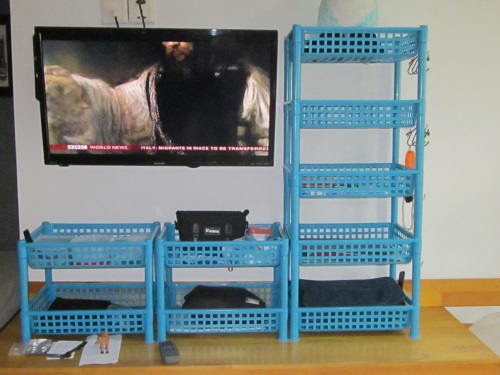 Below is my electronics corner minus the four-shelf monstrosity!  The maids can’t clean the area easily.  The table doubles as my dining room table so the area really should be cleaned.  I use two giant brown plastic trays to keep the eating area and laptop area separate and avoid a spillage catastrophe.  Ideally, I should be eating on one table and doing computer stuff on another table but I don’t live in an ideal world.  I am willing to invest in plastic shelving since its cheap and the benefits are immediate.  Plastic shelving can be taken apart and moved from one city to another city in the same country in the trunk of a taxi.  If I leave the country then I give the shelving to the maids and they deserve a present!  Investing in real furniture comes much later.  Buying things like tables means I am more or less committed to staying in the country for a year or more.  So far, I am having fun in Siem Reap but my track record for staying put in one place is not very good!  My family calls me “el piedra rodante“!

The four-shelf monstrosity finds a final home as an organizer for all my electronics. 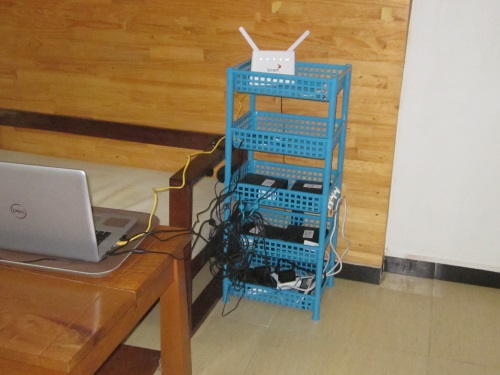 Not very aesthetic but the set up does get the cables of the floor. 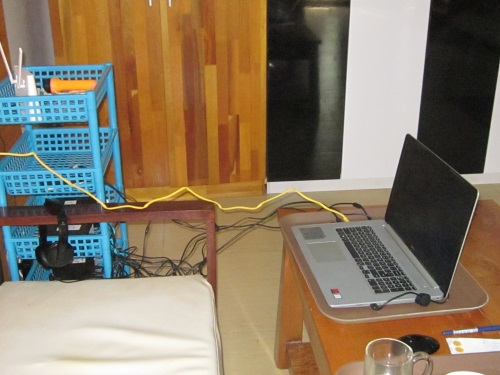 I get a blue plastic hook set and I now have a place to put my headphones!

The kitchen counter has zero extra counter space.  There are only plugs behind the microwave and the cords are not long enough for the cooking equipment to be moved.

I am using valuable counter space to just store dishes and sundries!  The living room is in good shape.  Now I need to fix up the kitchen. 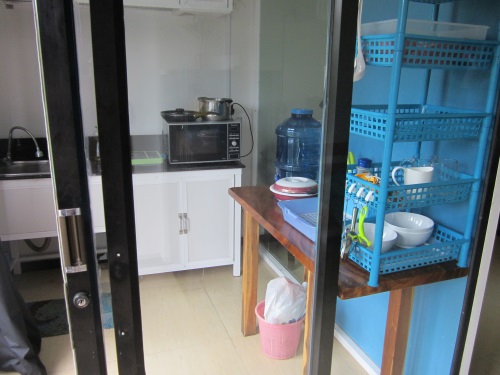 I find some smaller shelving that better fits the space I am working with in the kitchen.   I don’t want the shelving to use up all the counter space which I will use to do cooking.  The four-shelf monstrosity is banished to the TV area and then become the electronics tower.  The dishware bought is based on almost 20 years of living in Asia.  I use the big pot to make all sorts of stews.  Asia sells vegetables in packets!  You do have a choice of more than one packet.  I buy a vegetable packet.  I buy a meat which is generally chicken since chicken is relatively cheap in Asia.  Gizzards are not cheap like in the US but sometimes the fox has to have his gizzards.  First meat, then the veggies and finally I add my curry ramen noodles!  I buy dishware in sets of four which means I can put off doing dishes a day or two.  I guess I could entertain four people but that never happens.  In Asia you eat out when socializing!  Last but not least, I get mostly hard, plastic Chinese style dishware because that stuff is indestructible and cheap!  I don’t mess with the Western dishware in Asia because its more money and not as durable.  The vast majority of Chinese dishware is white.  I stick with white and minimal decoration so the dishware more or less matches. Light blue and white are not the worst color combination. 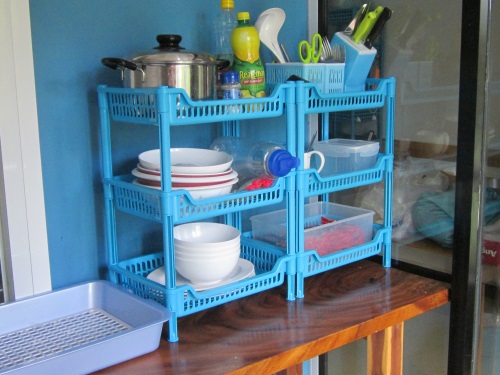 I can squeeze in one last narrow shelf for my basic food stuff and still have a little countertop for cooking.  Basic food for me is curry ramen noodles, and some cans of black beans and tuna.  With these three ingredients I can make ramen and tuna, ramen and black beans. and if I am really hungry, ramen and tuna and black beans.  I am just about always really hungry.  Cooking your own ramen doesn’t make a lot of sense in Cambodia economically.  Prepared food is actually cheaper than buying food at the supermarket and cooking it yourself in Cambodia.  This is unique to Cambodia.  Why?  I am not sure!  One theory that I have is that AC drives the prices of supermarkets.  Electricity is 1.5 times higher than in neighboring countries such as Thailand despite the fact just about everything else is cheaper than Thailand.  Maybe because the night markets don’t have AC and other overhead, the night markets can charge lower prices for meat and vegetables.  However, the traditional markets are absolutely not barang friendly.  Barang is farang in Khmer.   Farang is Thai for Westerner.  The supermarkets have a disproportionate amount of barang customers and maybe that is the real reasons prices are so high at supermarkets compared to traditional markets.  Barang are just willing to pay more money for convenience.  I know that I am.  Plus, the price of labor is so low in Cambodia that the cost of having the food prepared is minimal compared to other countries.  However, sometimes I don’t feel like eating at a noodle stand with a bunch of Cambodians that generally have zero English so I can’t talk with them.  Sometimes I want to eat my noodles watching TV and/or playing on the computer.  Also, my tuna, black beans and curry ramen is a food I have been eating for decades and something familiar in a strange land.  Two beer mugs and two coffee mugs at the bottom.  Cupware is breakable, small and used more often than any other kitchen utensils.  Therefore, the cupware deserves its own separate place in the narrower shelf area. 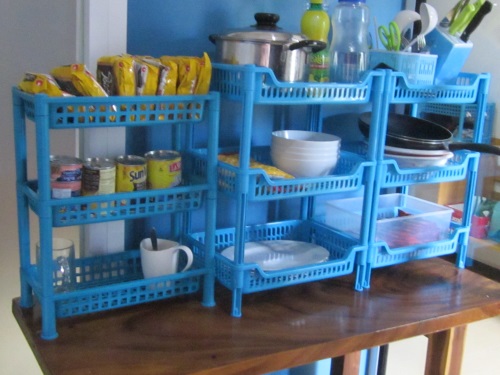 I used two kits to make the narrow three-shelf unit above.  The kits were for two-shelf units.  The leftover shelf ended up being a basket of sorts which I did use to store bananas atop of my refrigerator!  The small legs of the leftover shelf are very handy.  If the bananas touch the fridge through the mesh of a basket then the banana can rot and leave a mess.  I can clean the shelf a lot easier than the fridge surface.  Bananas are cheap in Cambodia.  I am trying to make bananas my new snack food.  So far, I have failed miserably in this endeavor!

Once every two or three months, I take all the plastic shelving and even the dishwashing tray and clean the whole mess in the bathroom shower area!  If you have a bath tub then let everything soak for a few hours.  If you have a balcony then get a giant plastic tub and clean everything there.  Bugs are a big problem in tropical places like Thailand, where I lived for 8.5 years and a total clean is needed now and then.  Do move the furniture and get behind the counters and clean that area as well.  Cambodia is identical to Thailand in terms of climate.

If you are person with a small budget that wants to add a little practical art to their living space then may I suggest buying some Ukiyo-e Noren curtains at Daiso.  I use a lot of utility shelving (Turn
Utility Shelving Into a Great Clothes Rack) as a space multiplier for my
small place in Thailand but this shelving gives my place a warehouse feel that I
don’t like.  I flirted with various solutions but ran into these Daiso curtains.  The Daiso curtains cover the shelving, keep out the dust and add an artistic touch to my place.  The curtains are 83 cm (32.6 inches) by 149 cm (58.6 inches).

I spent about 100 Hong Kong dollars at The One in Hong Kong at the Max Valu in the LG 1 floor which is kind of a 12 HK dollar store that sells mostly Daiso goods.  100 HK dollars is 12.88 USD!  So for around thirty bucks I radically changed the look of my apartment.  Below is “A Fine Breezy Day” by Katsushika Hokusai and is no. 4 in the Daiso product line and is one of the Thirty-six Views of Mount Fuji collection.

The next one is “Woman Playing a Glass Toy” by Kitawagawa Utamaro and is no. 3 in the Daiso product line.  The Japanese name is Bidoro o Fuku Musume and literally means a Woman Blowing a Vidro.  The vidro is a glass toy that makes a sound when you breathe through it. 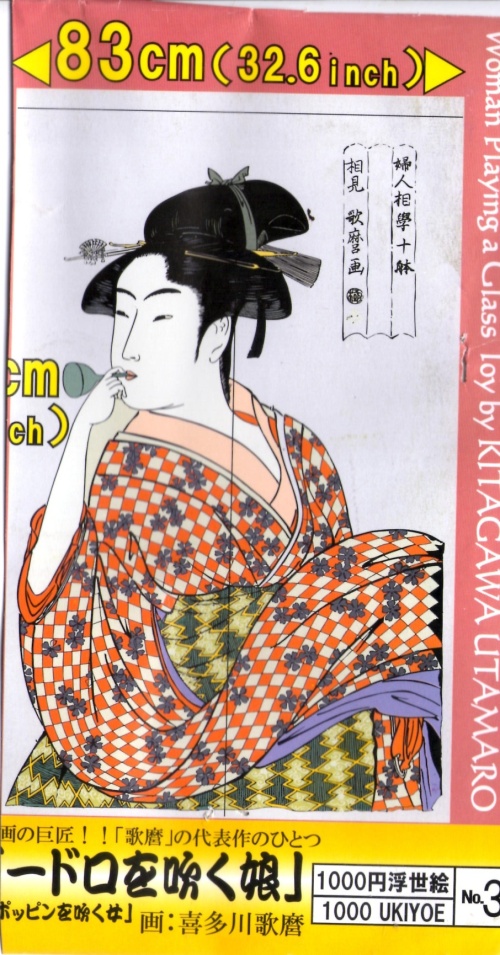 The last one is “The Great Wave of Kanagawa” by Katsushika Hokusai and is no. 5 in the Daiso product line.

Below is the before picture of my apartment shelving. 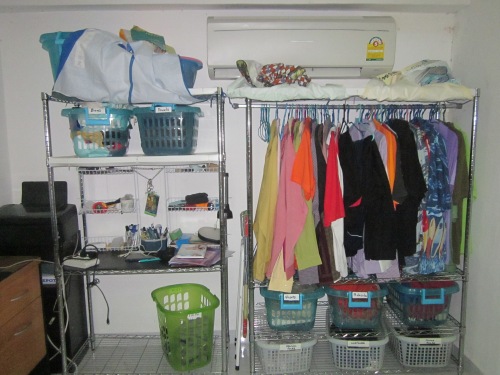 Below is the after picture of my apartment shelving.

And the same set up after tweaking:

And the same shelving system but used as a coat rack below and of course you don’t want to enclose wet stuff with curtains.  As you can see hats and sundries can go on the top.  You can put footwear in the bottom shelves.