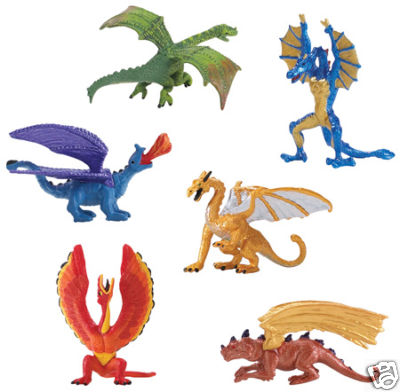 Safari Ltd makes a wide range of plastic miniatures some of which are well suited to Dungeons and Dragons.  Their line of Fantasy Figures includes Dragons, Days of Old, Fairy Fantasies, Mythical Realms, and Knights and Horses.  This looks like a lot of selection but upon closer examination one quickly realizes the figures of Days of Old, Fairy Fantasies and Knights and Horses are the wrong scale for D&D.  They are far too large for Dungeons and Dragons.  However the “miniature” version of the fairies could work in D&D. 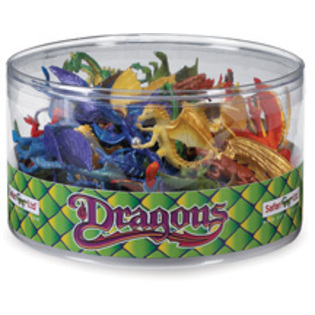 Mythical Realms has several pieces that would add something to a D&D campaign.  The mythical realms line includes a Pegasus, griffin, mermaid (D&D sirene), Poseidon (could be a D&D merman), minotaur, phoenix, chimera, centaur, Cyclops, Medusa, hydra, unicorn, a baby unicorn and an Arion.  The Mythical Realms are medium to huge in D&D.  There is an eight piece miniature version of Mythical realms tube that is a better deal price wise and the size of the figures would be medium which makes more sense for more game scenarios.  Below is a picture of the figures included in this set. 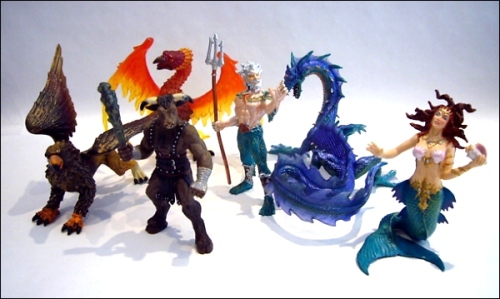 The main superheroes of the Terra Obscura universe include Adam the Ape, American the Crusader, Captain Future, Doc Strange, Fighting Spirit, Fighting Yank (I), the Ghost, Grim Reap, Lance Lewis, Space Detective, the Liberator, Magnet, Miss Masque, Mystico and Princess Pantha.  All the characters are based on characters that Nedor Comics published in the 1940s.  Moore seems to be taking a break from his more serious works here and just wants to have some fun.  The Terra Obscura gang is comic book camp at its best/worst.  I get it.  I wonder how many younger readers do.  You have outrageous characters like Adam the Ape side by side with the Space Detective.  Moore criticizes such juxtapositions in his twilight piece (https://foxhugh.wordpress.com/twilight-of-the-superheroes-by-alan-moore/).  In particular, Moore mentions the absurdity of putting Sgt. Rock side by side with the Legion of Superheroes.  Moore makes the material a little darker in that the Terror has been killed by an evil nearly omnipotent machine and death of major heroes really only becomes acceptable in the eighties with the death of Marvel’s Phoenix and after that becomes almost common place due to market response.  The death of Superman series is the ultimate example of how market forces drive comic books rather than aesthetic logic.  The fact that Superman was not actually dead didn’t stop DC from making millions from a line that was moribund even if the character was not.  All in all characterization is not up to Moore’s usual standards.

Doc “Tom” Strange is a doppelganger of Tom Strong from another Earth billions of miles away.   Doc Strong points out that the adventures of the heroes on Terra Obscura are described in comic books on his Earth.  Tom Strong shows Doc Strange a comic book with a cover of the actual source material.  There is not only a comic book within a comic book but a comic book that points directly to the source material.  Tom Strong is more of a pulp fiction hero and very similar to Doc Savage.  Doc Strange is more similar to Superman.  The two superheroes look alike and the superman version meets the pulp fiction version of itself.

The absurdity of heroes of vastly different power levels interacting in a more or less equal manner is taken to new heights.  Tom Strong once fought and defeated Doc Strange using atomic gloves!  The atomic gloves are basically supped up brass knuckles.  Doc Strange has literally crossed billions of miles of interstellar distance over a period of decades without food, water or sleep and therefore can withstand the extreme rigors of space but can be knocked out by atomic gloves by a character that maybe has the strength of ten men!  I think Moore is poking fun at the convention that any superhero stands some chance in a battle with any other superhero regardless of power levels.  Daredevil fighting the Submariner and later the Hulk comes to mind.

The WizKids superhero game tries to incorporate this crazy comic book logic into their minis game.  I pitted the Hulk against Batman.  Batman was able to knock out the Hulk with a batarang!  Our group consisted of hard core D&D mini enthusiasts were such happenings are impossible and we never played the game again but later I thought about what happened and realized this is the way a comic book universe operates rather than a D&D universe.

I give this reboot a rank of five of the five reboots looked at.  This means Terra Obscura is at the bottom of the pack but Moore’s worst comic book generally surpasses 99% of the comic book material out there and I would definitely recommend this series to a fellow comic book reader especially one the revels in the kitsch factor of comic books.