Pay for the Thai Canal with an Island Next to Bangkok! 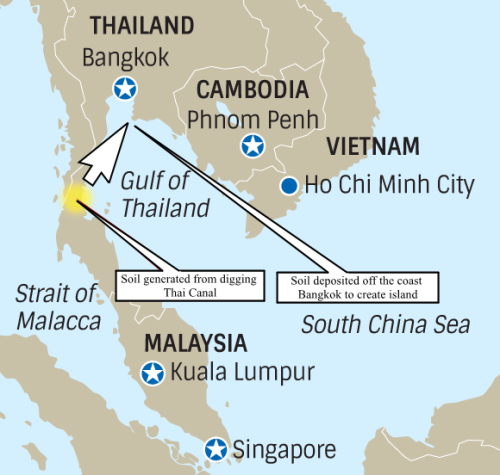 The Thai Canal, also known as the Kra Canal, is a proposal to connect that would connect the Gulf of Thailand with the Andaman Sea across southern Thailand. The canal would provide an alternative to transit through the Straits of Malacca and shorten transit for shipments of oil to Japan and China by 1,200 km. China thinks of the canal as part of China’s 21st century maritime Silk Road. Two of the biggest problems of building such a canal are cost and what to do with all the soil generated from digging the canal. In my plan the soil is used to build an island off the coast of Bangkok and this island generates income to pay for the canal on top of the income the canal will already generate from ship traffic.

Thailand is the land of islands but unfortunately there is no island getaway for Bangkok residents that can be a day trip. Koh Larn, Koh Si Chang, Koh Samed and Koh Khram Yai are all over two hours to five hours away and are subject to the vagaries of traffic. Due to traffic problems even weekend trips to these islands are difficult to execute. An island that is about an hour away would allow Bangkok residents and foreign tourists to come to Thailand and enjoy fun in the sun. This island would generate income from land sales, land rental and additional tourist income! Bangkok desperately needs the green space. Bangkok only has 3.3 square meters of land per resident according to the Economist. Bangkok is too built up for other ways to increase green space. The lack of green space seriously undermines the livability of Bangkok and probably means Bangkok can never truly be a world class city that attracts the best and the brightest from around the world. The new island can be Bangkok’s equivalent of New York’s Central Park.

The size of the island is subject to planning. Using sand from the ocean floor would deepen the Bangkok Bay and in general this is a good thing since a deeper bay can accommodate bigger ships. If the land shipped from the canal is mostly used for top soil then a much larger island can be created. How large is a topic engineers are better off figuring out than this lowly English teacher!

Belgium wants to create a donut shaped island in order to store energy created by wind power as described in Wired. Regardless of the energy storage possibilities, a donut shaped island is unique, iconic visually, more or less doubles waterfront views and the doughnut center could be used to store fresh water. Last but not least such a shape means the soil available can be used to make a much larger island. They say a picture is worth a thousand words and I tend to agree with this view.

Extending the One Belt One Road Initiative to Latin America

Should Maglevs be Upgraded to Vactrains?

A Great Statue to Honor a Great Man

Pay for the Thai Canal with an Island Next to Bangkok!

Thai Colors of the Day

Thai Nicknames and their Meanings

The King of Thailand – Eight Areas of Accomplishment