Mr. Nebula is a planet level decorator with cosmic power!  In an alternate Earth, Mr. Nebula decides to change the “drab” and predictable color scheme of the Justice League costumes.   Even if the hero changes costumes, the new color scheme goes into effect!  Some would argue that Mr. Nebula’s aesthetic sense is essentially kitsch.  Only the clothes of the Justice League are changed and not their powers.  Each hero has a different opinion about the new color scheme of their costume and their comments have been recorded below. 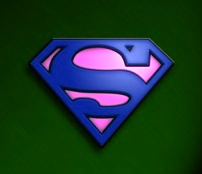 Well I was getting tired of the red, white and blue at the symbolic level.   Especially, since I renounced my US citizenship (Can Superman Renounce his US Citizenship?).  The new color scheme does remind me of the Kryptonian flag which was strong on secondary as opposed to primary colors and maybe I should wear a costume that reflects my interplanetary roots.

All the Green Lanterns wear the same basic uniform.  If I wanted to wear a uniform then I would have joined the army.  I am a superhero for goodness sake.  Being a super hero is all about being an individual and I always envied the costumes of the other super heroes but no more!  I am not sure I am into the garish color scheme but anything that makes me stand out among the other Green Lanterns is a good thing.  I am happy to report that the Guardians of the Universe have had no success in undoing the spell or whatever of Mr. Nebula so I guess I am “stuck” with this outfit, LOL!

I have been meaning to change the orange and green outfit for awhile anyway.  The new colors are a little too feminine for me if you know what I mean but the good news is that Mera really likes the new color scheme and I guess that’s what really matters.

How am I supposed to strike fear into the hearts of criminals in this get up?  The Joker was practically laughing to death the last time I fought him.  Catwoman likes the outfit and that can’t be good given her garish taste in costumes.  Normally I don’t condone murder but I think in some cases murder is acceptable.  I wonder what sort of cosmic weapon would be needed to destroy Mr. Nebula totally!

Clothes are a human affectation.  On Mars we only wore clothes for special ceremonial purposes.  I neither like nor dislike this outfit although I do think the softer colors bring out the green of my complexion and eyes in a more pleasing manner than my previous costume.

I am an Amazon not a hooker which is what the current color scheme makes me look like.  Even the power of Zeus has not been able to undo the hex of Mr. Nebula but I swear by Almighty Hera that I will find a way to undo this curse!