Where can you buy American comic books in Asia?

Below is a list of Kinokuniya stores in Asia:

Siam Paragon, Bangkok – The best source of Western comic books outside of the Philippines!

I mention the store but of course Australia is basically a Western country that happens to be in Asia and Western comic books are everywhere.

Page One is a Singaporean chain of bookstores that is also all over Asia and also has a pretty good selection of Western comic books.

Page One locations are listed below: 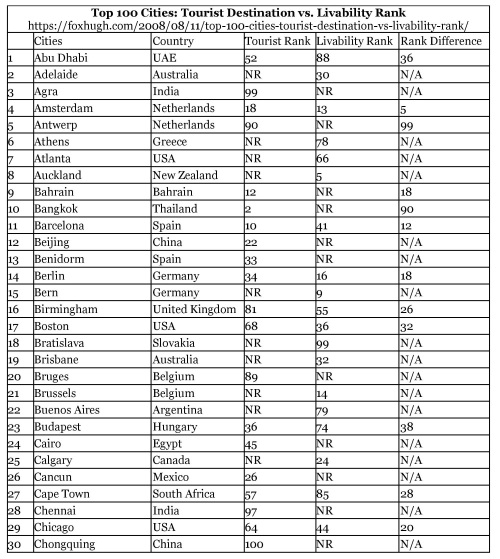 The following study is an attempt to objectively explore the truism:

“Nice place to visit, but I wouldn’t want to live there”

The operational version of this truism would be that tourist cities and livable cities are different cities. The truism has been named the Visit/Live Theory for the purposes of this study.  Two lists that rank cities were compared.  The first list ranks cities according the number of tourists that arrived in a city.

N/A, not applicable since the city was on only one of the lists

Geneva had the greatest difference in rank.  Geneva is a great place to live (2) but doesn’t get very many tourists (98) relative to other cities.  Shanghai had the second greatest difference in rank but in the opposite direction as Geneva.  Shanghai is a city that many tourists visit (13) but only ranks 100 in terms of livability.  A practical implication for expats is to be wary of deciding to live in cities you like to visit without taking the Visit/Live Theory into account.