Archibald the Talking Wishing Wellis a very, very minor character in the Harvey universe but I have a soft spot for sentient objects.  I even wrote a book on the subject called Household Fables.  Archibald the Talking Wishing Well is a supporting character in the Casper universe.  Hot Stuff’s trident is also sentient and capable of doing magic.  Unfortunately while the Casper universe is overrun with, one-shot, sentient objects this is really not something that is done in the DC universe.  However, there is the Haunted Tank which is a tank haunted by the ghost of Robert E. Lee and this is pretty much the foremost sentient object in the DC Universe and actually almost the only sentient object in the DC universe that is not a one-shot.

The Haunted Tank gets lost in a back story of Tales of the Unexpected, just before Lee’s fight with the other ghost Captain Fear, and finds himself in the Casper universe.  Archibald asks the Haunted Tank if he wants a wish.  Robert E. Lee wants his body back!  One can assume that Archibald can see and hear ghosts since Archibald communicates with Casper.  Archibald gives the transformation a try but just doesn’t have the juice for such a giant magical spell.  Lee starts to wheel himself back home but Archibald yells “stop”.

I have written about anthropomorphic animals before at:

Baby Huey thinks Rubberduck is so cute and tries to give him a big sloppy kiss.  Rubberduck mistakes this attempt at affection for an attack.  Baby Huey effectively has super strength and has been known to toss cars around.  Rubberduck can stretch his body like Mr. Fantastic or the Elongated Man.  Rubberduck wraps his body around Baby Huey and starts the big squeeze.  Baby Huey almost passes out but with one gigantic push of his arms manages to snap out of Rubberduck’s grip.  Baby Huey then whirls Rubberduck around and around by his legs and finally lets him go.  Rubberduck falls into a convenient lake unconscious.  Baby Huey jumps into the lake but remembers that he can’t swim.  Rubberduck drowns.  Baby Huey cries and cries until Papa Duck calms him down.

4) Hot Stuff the Little Devil vs. Etrigan the Demon

Only the Blue Devil, Etrigan the Demon and Lucifer had their own titles at one time or another.  The Blue Devil is an odd little second or even third tier character that is currently in comic book limbo.  Lucifer is one of the most powerful characters in the DC universe and could probably wipe out the entire Harvey universe without much trouble.  Poor Hot Stuff would be hopelessly over matched in a contest against Lucifer.  Therefore, Etrigan the Demon emerges as the champion of the DC universe.

Hot Stuff wanders away from Deviltown and encounters a section of hell he has never seen before.  Etrigan is considered one of the more powerful demons even in the much darker recesses of hell.  Etrigan is probably stronger than any demon in Deviltown.  Hot Stuff is a baby that wears asbestos diapers.  Hot Stuff takes one look at Etrigran and runs back to Deviltown.

5) Nightmare the Galloping Ghost (Casper’s horse) vs. Comet the Super-Horse

There are not a lot of important horses in the DC universe.  Bat Lash has a horse named Daisy.  Victory and Vanguard are flying horses used by the Shining Knight.  Comet the Super-Horse is Supergirl’s horse and the most famous DC horse and just about the only DC horse even hard core DC fans can name.  Comet was once a human but was turned into a horse and then a super-horse by Circe.  Circe is generally a bad witch but will do good deeds if a good looking blonde hunk is involved.  Comet has all the super powers of Superman and Supergirl but none of their weaknesses.  Comet is immune to Kryptonite and does not lose his powers under a red sun due to the magical rather than Kryptonian origin of his super powers.  A horse is stronger than a man and a super horse is stronger than Superman.  Superman alone can defeat Supergirl but Supergirl astride Comet can defeat Superman.  Super-Girl with Comet beating on Superman is more or less a story line in more than one Silver Age Superman family issue.  Krypto managed to survive the destruction of the Silver Age continuity by DC during the Crisis on Infinite Earthsbut Comet and all the other super pets  that included Streaky the Supercat and Beppo the Supermonkey did not so this adventure takes place in the Silver Age exclusively.  When is HeroClix going to create a Supergirl plus Comet miniature using their Brave and Bold combined hero system?

Nightmare descends from the Phantom Zone to the DC Earth and offers her haunches to Comet.  The two can communicate telepathically.  Comet once was a human but has been a horse for a very, very long time.  Normal horses are not as intelligent as Nightmare and break easily.  Nightmare’s fluffy mane is like nothing Comet has ever seen before.  Nightmare’s Disney style eyes give her an exotic look that Comet finds irresistible.

I have written about comic book war heroes before at:

The DC heroes include Blackhawk, Boy Commandos, Captain Storm, Creature Commandos, Enemy Ace, G.I. Robot, Gunner & Sarge, Haunted Tank, Hunter’s Hellcats, Johnny Cloud, the Losers, Mademoiselle Marie, Red, White and Blue and Sgt. Rock of Easy Company. Sad Sack is sadly assigned to Easy Company and has Sgt. Rock has his NCO.  Sgt. Rock takes one look at Sad Sack and knows what he has to do.  Sad Sack is put on point and taken out by a German sniper shortly afterwards.  Even two days later, no one in Easy Company even remembers Sad Sack.

8) Stumbo the Giant vs. Colossal Boy

Only Madame Xanadu and Zatanna have had their own series.  Zatanna has been an important member of the Justice League of America.  Zatanna even appeared in the Superboy TV show Smallville!  Zatanna is also famous for her costume and especially her fish net stockings.  Zatanna wins the DC witch wars.

Wendy accidentally creates an interdimensional portal that takes her to the DC universe.  Wendy is flying around Gotham City with her broom and literally runs into Zatanna.  Wendy is used to ugly adult witches with green skin warts and ugly purple robes.  Wendy can magically sense that Zatanna is a witch like she is but the sort of witch she wants to be when she grows up.

Wendy, “You are beautiful”.

Zatanna responds in a maternal voice, “You are pretty cute yourself kid but do you mind if I give you some fashion advice?”

Zatanna uses her magic to give Wendy a makeover. 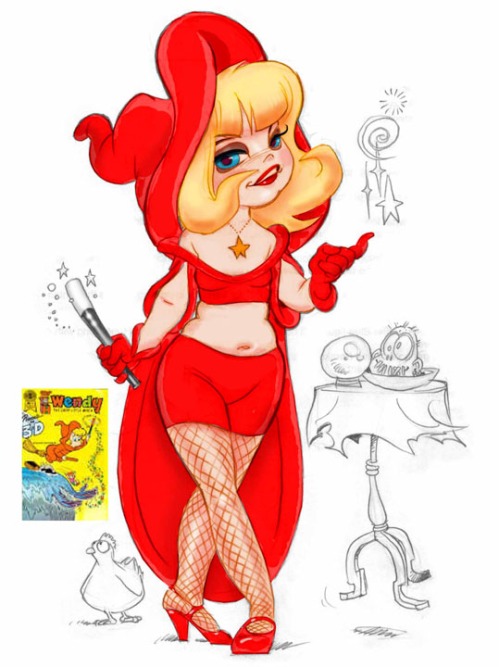 Wendy is overjoyed.  Zatanna helps Wendy get home and promises to visit her someday.  Casper meets the new Wendy and feels a strange sickly sweet nausea that disturbs him to his astral core.  Suddenly Casper doesn’t feel so friendly towards anyone that looks at Wendy.  Casper has been lonely ever since Nightmare disappeared but this new Wendy more than makes up for the disappearance of Nightmare.