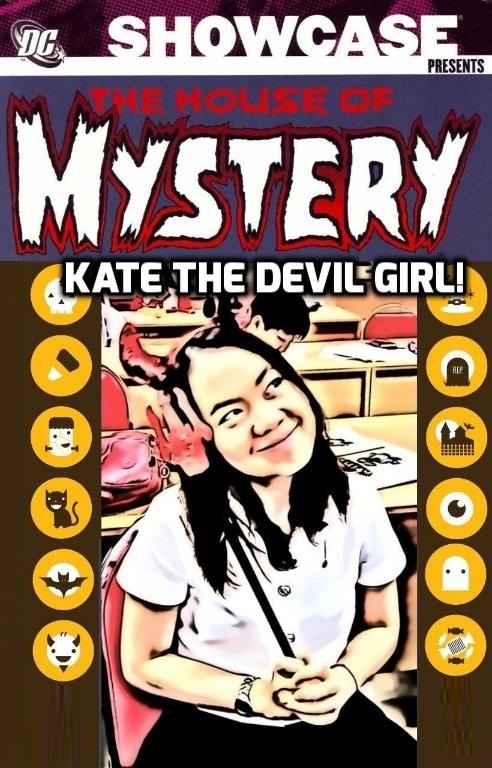 The first volume of The House of Mystery was a horror anthology.  Kate the Devil Girl never made the cover The House of Mystery but was a back story that had a loyal following in the seventies and DC has collected her six appearances into a single volume.  Kate the Devil Girl is a normal high school student until she finds a demonic wand that gives her various demonic powers including super strength, limited invulnerability and the ability to shoot magical flames from her hands.  The catch is that every time she picks up her wand, she has evil impulses that become stronger and stronger and she is in danger of becoming a full blown demon and therefore also more powerful.

At the end of the adventure, Kate always resolves to never use the wand again but there is always some emergency that forces her to use the wand again. In her third appearance, the wand accidentally absorbs the life force of a Cambodian exchange student and the head of the wand can now talk and give her advice but mostly the wand urges Kate to figure out a way to return him to his human form.  In the sixth and final appearance of Kate the Devil Girl the various plot lines that had developed were not resolved.  Many people thought that Kate the Devil Girl would become a Vertigo title eventually. In this incarnation, the various loose plot lines of the original would be resolved but this never happened.  Perhaps this reprint means new adventures of Kate the Devil Girl are possible in the future.

Like Loading...
This entry was posted in DC Comics, Metafiction and tagged Devil Girl, House of Mystery, Kate the Devil Girl, Vertigo. Bookmark the permalink.