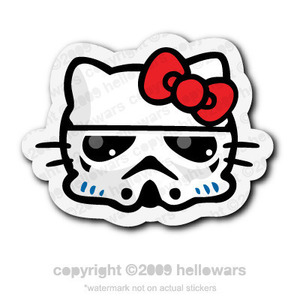 Kitty was exhausted.  She had visited Godzilla (https://foxhugh.wordpress.com/fiction/hello-kitty-vs-godzilla/) at the deserted island they had agreed upon at a prior meeting in Tokyo.  Godzilla seemed to really enjoy his job as Japan’s cookie taster and after many hours and many tons of cookies later, they both had arrived at the conclusion that Hello Panda cookies were the best.  Kitty had enjoyed her visit with Godzilla but upon arriving back in Tokyo received a phone call from Snoopy (https://foxhugh.wordpress.com/fiction/hello-kitty-snoopy/) that had been extremely unpleasant.  Snoopy wanted to marry Kitty.  Kitty had to explain over and over again that they were just friends and that she already had a boyfriend, Dear Daniel.  Kitty liked Snoopy but sometimes he could be sooooo childish!

Kitty had received an experimental teleportation booth from Sanrio.  She was supposed to test the device for her online fan community.  Kitty pressed the coordinates that had been emailed to her earlier.  She would teleport directly to the headquarters of Sanrio.  Half way through the operation she received a phone call.  She answered and immediately recognized the voice on the other line.  It was Snoopy.  Kitty quickly hung up the mobile but as she started to retype the code couldn’t remember exactly where she had left off.   Suddenly she realized that she had retyped three extra numbers to the original list.  “Oh well” she thought, “I am sure the device will just ignore the extra coordinates”.

After a very long, long time in the teleport booth, the machine finally came to a halt and the door opened.  In front of her was a green elderly man, bald, about her height with pointy ears in a brown bathrobe.

“Who are you?” Kitty asked.

“I am Kitty,” Kitty responded.

“Very cute, you are.  What planet from are you, hmm?  Hmmmmmm,” Yoda said.

“I am from Earth,” said Kitty

“Who is Darth Vader?” Kitty replied.

“No one is really bad.  Maybe I can talk with him.” Kitty replied.

“Been taken over by the dark side, Darth Vader has.  Hmmmmmm.  But strong in you, I sense the force is.  Hmmmmmm. Perhaps, lead him back to the light side of the force, you can.  Yes, hmmm,” said Yoda.

Yoda departed and Kitty waited for Darth Vader.  The Imperial March music started to play and suddenly out of the shadows Darth Vader appeared.

Darth Vader looks at Kitty and said, “Where is Yoda?”

Kitty replied, “Yoda has left but I wanted to talk to you”

Darth Vader, “I have nothing to say to a puny creature like yourself.  Although I must admit you are quite cute”

Kitty said, “You remind me of someone I once knew called Godzilla.  Everyone said he was a bad guy too but he wasn’t.  I don’t believe in bad people.  I think everyone is good at the core”

Darth Vader shot blue energy bolts from his hands but strangely the bolts parted around Kitty as if she had a force field around her.

“You dare laugh at Darth Vader!  This impudence will be rewarded with death,” growled Darth Vader.

Darth Vader took out his light saber and was about to strike Kitty when he looked into her eyes.  He felt his world spinning.  Suddenly all the evil he had done flashed before is eyes.  He could feel the pain of all those he had killed and injured.

“I embraced the dark side to save my wife and instead I killed her!  Look what I have become.  I am a twisted monster,” Yelled Darth Vader desperately.  “What can I do?”

“Well first of all you have to change that outfit!  You are dressed totally in black.  No wonder you have the grumpies.  Wear some pink and your whole mood will change,” said Kitty.

Darth Vader listened and thought that might be a start. Kitty and Darth Vader spent the next few hours creating a pink and white outfit for Darth Vader.  Darth Vader put the outfit on with trepidation.

Finally Darth Vader spoke, “I feel totally different.  Yes I have done evil things but now I see a new side to the force.  There is the dark side which as you say is icky.  There is the light side which is boring and makes you pompous like Yoda and Obi-Won Kenobi.  And everybody goes on and on about what a good guy Obi-Won was but let me tell you the guy used words like a fist!  First of all the guy was totally passive aggressive like all Jedi.  Every compliment that came out of his mouth was back handed.  I was practically his son and he never hugged me once, not once!  Here I am some orphan kid that grew up on a planet where my mom was a slave, a slave!  I needed love and affection from my mentor not some jerk on a power trip.  But now I realize there is the pink side which is fun and light hearted and so kawaii.  Affection and love will rule the galaxy.  This is my new mission in life.  I will use this new insight to create a new order of Jedis, the Pink Jedis.  The first rule I will institute is that all Jedi must hug their paduans at least once a day” 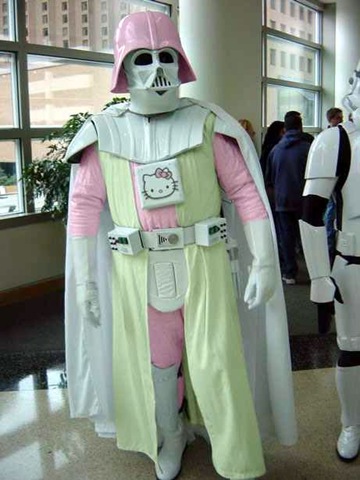 Kitty wasn’t sure what a Jedi was much less a pink Jedi but thought Darth Vader looked great in pink and said, “I think you look wonderful and I hope your plans work out.  I have to go home and feed my cat and tell a certain big nosed dog to stop calling me all the time.  Do you people know anything about teleportation?”

Darth Vader replied, “Your words are mysterious but I will assign the finest teleportation technicians in the empire to help you”

The technicians of the Empire were able to figure out that if you added extra digits then you not only traveled in the three dimensions of space and the one dimension of time but through the other dimensions.  Kitty came from the future, from far away and from another dimension as well.  Darth Vader founded the Pink Jedi.  Their word spread and the galaxy because a place of peace and cuteness.  The Pink Republic was founded and they ruled the galaxy.  Eventually invaders from another galaxy, the Yuuzhang Voong, came to wage war on the Pink Republic and they enslaved and killed all the inhabitants of the Pink Republic.

The following product was created shortly after I wrote this story.  Was this a coincidence?

If you liked this page then you will probably also enjoy: