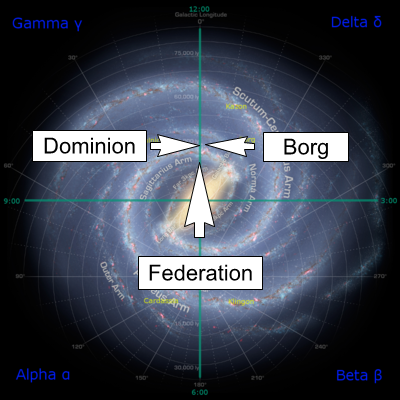 Star Trek has had only one animated series over thirty years ago (Star Trek: The Animated Series).  The next Star Trek TV show should be an animated series because of the success of Star Wars: The Clone Wars shows this sort of animation can work.  Also, Star Trek needs to create a new generation of Star Trek fans if the franchise is to survive in the future and animation is especially popular among younger viewers.  I would like to make the following proposals for a new Star Trek animated series:

2) The Borg versus the Dominion

This series is set in the future about two centuries after Star Trek: The Next Generation in the 26th century (see figure above).  The Dominion has evolved into a peaceful empire that coexists with the Federation but is also a cultural and economic rival.  However, the Federation due to the Dominion War two hundred years earlier does not totally trust the Dominion.  Warp drive is advanced enough that travel using star ships between galactic quadrants is possible.  The Romulans and Klingons are now part of the Federation rather than adversaries!

The Borg Empire has attacked the Dominion in a full scale assault along the entire Delta border of Dominion space!  Should the Federation aid the Dominion against the Borg or stay out and focus on strengthening its own defenses against the Borg?  The Vulcans prefer a wait and see strategy.  The Federation cannot easily send ships directly through the Galactic Center due to a super massive black hole and the stellar density of the center and must veer traffic towards the Gamma or Delta quadrant and cannot charge down the middle between the two quadrants.  However, a project to create a star ship that can handle the Galactic Center has been underway and the war creates new pressure to complete this project.  Could there be radically different life forms in the center of the galaxy?

Some Children of Data follow the way of flesh and have even experimented with organic implants. Reverse engineering of Borg technology by the Dominion ironically leads to research that allows the addition of increasingly sophisticated organic implants to android life forms.

Some of the Children of Data follow the way of light and believe non corporality is the ultimate evolutionary step the galaxy should pursue and may have aid from the very mysterious Organians that are rumored to reside in the center of the galaxy.  The inaccessibility of the Galactic Center may provide privacy for beings of pure thought!  The massive black hole in the Galactic Center may be the ultimate form of transportation for beings without mass!

This series would be titled Star Trek: Galactic Evolution.  This series would chronicle not just a journey through space but an evolutionary journey at the galactic level.  This series could use or not use 3D CGI animation but should borrow stylistic lessons from animated space sagas like Macross and Neon Genesis Evangelion but take these lessons to a new level.  The frenetic comedic laden style of the very successful Teen Titans Go! should also be seen as a model for this new show that will attract a new generation that has grown up with computers and smart phones and requires a higher level of visual stimulation than past generations.  Viewers should be able to participate with series related content in an immersive and meaningful way online!

This series is set about twenty years after the events of Star Trek: The Next Generation.  The great grandson of the legendary Captain James T. Kirk is attending Star Fleet Academy.  The great grandson is called Tiberius.  Tiberius is called “T” by his friends.  Admiral Jean-Luc Picard has retired from active duty and is now the Dean of the academy.  Tiberius has a dark secret from his years as a teenager on an outpost in Federation space that was relatively lawless, impoverished and bordered Klingon space.  Tiberius is a lot stronger than a human should be and also has a nasty temper!  T has a lot to prove and can be impetuous but also has a lot to offer.

This show will never happen but I would watch it!