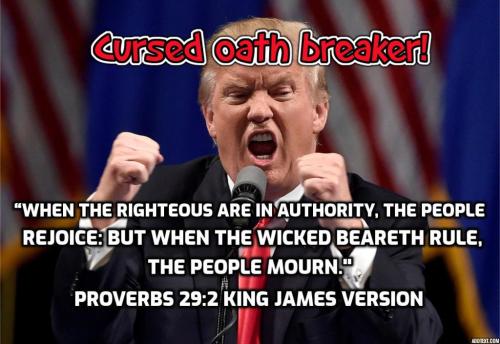 “When the righteous are in authority, the people rejoice: but when the wicked beareth rule, the people mourn.”

President Trump has made 15,413 false or misleading claims over 1,055 days

An Oral History of Trump’s Bigotry

Donald Trump sexism tracker: Every offensive comment in one place

5) Trump may be a traitor to his own country!

6) Trump is an oath breaker.   America is a Christian nation that broke an oath with another people of the Book i.e. Iran. When two people of the Book swear before the mighty Kings of the Earth and God for peace and then break the oath then that line is cursed. The children of the oath breaker will be cursed and their children for seven generations! God has CURSED Trump with madness! The children will follow in madness and the children of the children for seven generations. If the wicked king walks among the low of the other tribe of the Book then he will die but his curse will be lifted from his children and their children!

This entry was posted in Uncategorized. Bookmark the permalink.